It’s a new regime and changing of the guard for Anaconda High on the gridiron. And for first-year head football coach Jesse Robins, 2018 marks a pivotal time in the history of a program without a state championship since 1951 and only a handful of playoff victories since they were a football juggernaut in the late 80s.
Making matters worse for Robins is coming to grips with a total roster of just 24 players including five freshmen and a disappointing 3-5 record.

Robins is no stranger to the program even if this is his first head coaching gig. He was a three-year assistant under Bob Orrino – the man he replaced after stepping away following the 2017 campaign.
Gone are all the assistants from last year including a talent-laden senior class that featured future Montana Grizzly linebacker Braxton Hill. Luckily for Robbins, Anaconda hit the jackpot landing former Montana State tight end Austin Barth and Carroll College lineman Riley Schell to solidify the staff.
Like any new head coach, Robins is trying to establish a new identity – his own stamp on the program he was entrusted to after Orrino’s nine-year run on the sidelines. And one of his sole focuses is not looking in the rear view mirror.
“We’re not looking to really replace anybody,” Robins told the Montana Standard. “We’re going to be our own team. We’re going to use these kids as who they are and not try and change them to fit anything specific and work to their advantages.”
NEW LOOK ‘HEADS
Barth is a western Montana three-sport legend, anchoring Columbia Falls basketball, football and track and field teams before committing to the Bobcats and Rob Ash. Initially recruited as a quarterback, he was moved to tight end and long snapper in one of the most exciting and prolific offenses in the FCS.

Last year he led the Lone Peak football team to a Class C 8-man State first-round loss to eventual champion Flint Creek. Now, he wants to use his knowledge to help right the ship in Anaconda.
“Winning is one of the toughest things to coach, it’s more of a culture and mindset,” he said, leaning on his experience playing for a prep coaching legend in Cary Finberg in Columbia Falls. “At CFHS I was a 4 year (letterman) and played with a lot of athletes that did things the right way. Such as working out, making every open gym or 7-on-7. I believe getting a whole team to part take in those is where the chemistry is built and the winning starts. I’m hoping we can get these younger guys to find the older guys that are doing things right and try to follow in those footsteps. If we can get them to do that then AHS is going to be heading in the right direction.”
Barth will take the reigns of the offensive side of the ball, installing the framework of Tim Cramsey’s 2015 record-setting Bobcats offense that amassed 519.7 yards and 41.9 points/game.
“Coach Cramsey was a genius, he threw a lot of different sets into our playbook,” Barth said. “As a player you had to learn on the go. What we are going to do is try and do is always have the opposing team guessing with what we are doing with our different formations different motions and a whole lot of running the ball. Coach always said the best 11 players will play. And that’s exactly what we are going to do. Get the ball into our playmakers hands and let them do their thing in some space.”

That will be easier said than done. He inherits an offense that struggled with consistency due to key injuries and lack of depth.
“Learning a new offense is always tough. Learning a college offense is even tougher,” Barth lamented. “As a coaching staff we picked out the schemes that we want Anaconda football to be and are trying to hammer that into our players heads. It’s a lot of info and we are trying to simplify it down to make it as easy as possible for these players. We are going to have mistakes early on just like any new offense will we just need to be quick learners and trust the process.”

That’s where meshing skill positions and the hogs up front comes into play. Ironically, Schell was in his first year as an assistant on the team that beat Barth’s Bighorns under the tutelage of Mike Cutler.
Schell has been working with solidifying the technique of the offense and defensive lines, the same groups that dominated opponents during an undefeated Class C 8-man championship run last year with the Philipsburg-Drummond co-op Titans.

“Riley is a fantastic coach, he knows his stuff,” Cutler said of his former assistant. “Anaconda is lucky to have him.”
Gone is three-year starting QB Hill and entering is untested junior Dylan Smith (5-foot-11, 210 pounds), returning from a season-ending knee injury that put his sophomore season on the shelf.

Smith is joined in the backfield by senior tailback Dylan Skocilich (5-8, 150) and sophomore Pat Galle (5-9, 145) along with returning wideouts in sophomore Braedon Sawyer 6-1, 160), and juniors Dan Byrne (5-8, 140), Kylar Gochanour (5-9, 145) and Michael Galle (5-11, 150).
On the offensive line, returning lettermen include seniors Riley Cobban (6-4, 210) and Jordan Black (5-11, 245) , junior Grady Snow (5-10, 180) and sophomore Sean Kellegher (5-11, 250).
Efforts to a definitive starting lineup weren’t successful, but to Robins’ credit he’s been focused on hammering down every aspect heading into Friday’s season opener in Salmon, Idaho.
One positive heading into their trip across the border is Anaconda put it on the Savages at Mitchell Stadium last year, rolling to a 51-29 win.
If you can’t make the trip, listen live to Copperhead athletics at http://copperheadcountry.airtime.pro starting with the Community of Hospital pregame at 6:50 p.m.
below is the complete roster for the Copperheads. 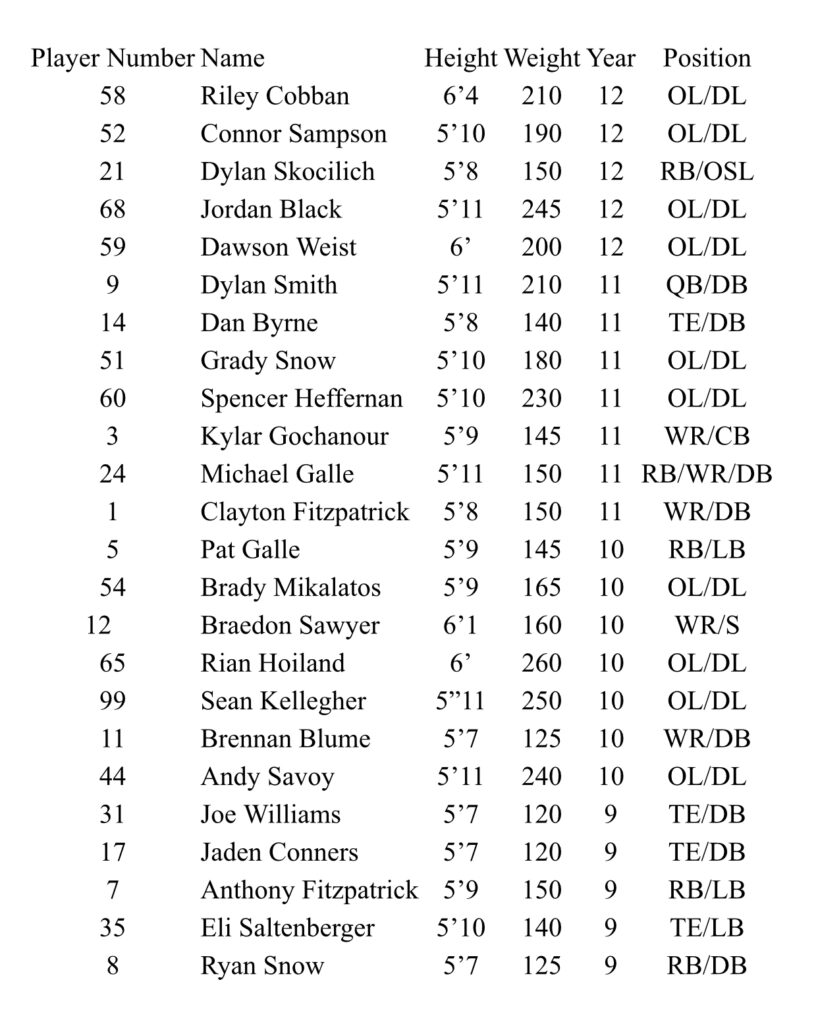